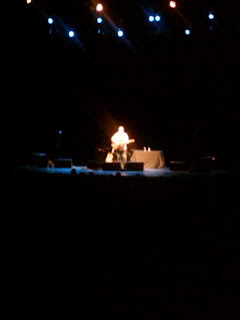 Copperhead Road
Steve Earle doesn't have as much energy as he did years ago, but tonight's show is much better than any I have seen recently - he seemed like his old self again.
Loved it when he was discussing how wars are normally fought over money (and oil is money) he told a heckler "F**k you." Even better it was at Wolftrap when it happend! :-)
He was able to rock a large venue all by himself. Voice was great. He's playing was great. And any Steve Earle fan was happy.
John Prine was the headliner and put on a great follow up to Steve Earle. I even knew a few of the John Prine songs even though I didn't know I was a fan :-)