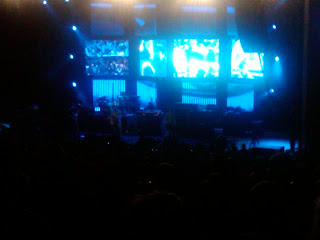 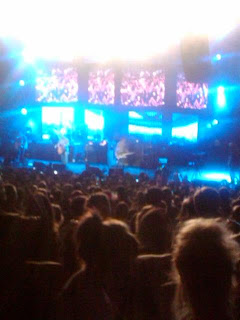 Merriweather Post Pavilion does the worse job of handling the rush of cars trying to park before a show. I see a ton of shows and this is the worse venue! It took over an hour from the point I was at the exit ramp off 29 (about 0.5 miles from the Pavillion at that point) till I was actually parked. I have no idea why it took over an hour to do what would have taking less than 5 minutes to have done normally, but because of the poor parking situation I missed The Features' set entirely and the first song by KoL. and of course you are so stressed about being stuck in a car move 5 feet at a time that by the time you actually get into the venue it takes you a beer or two (and these are big 24 oz beers) just to chill again.

The sound at Merriweather Post Pavilion was very muffled outside of the seated seats. I was shocked with how much better it sounded once I finally got to my seat. I felt bad for the poor people stuck on the lawn. They probably didn't even know how muffled and bad the sound was out there. No view and poor sound... sucks...

The Kings of Leon did put on a good show (but it was a short set) and you can tell they are enjoying that they are popular now, but it hasn't seemed to have gone to their heads. They played well and have good stage presence. I enjoyed the songs that seem to be getting air time on the radio, but also some of their older songs. I will need to go out and get their first three albums now. Can't say KOL are the next big thing, but it is a good show.