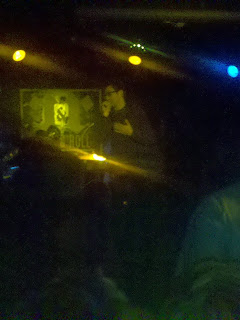 Mayer Hawthorne's & the County laid down the blues at the Rock and Roll Hotel! This show restored my faith in being able to see a good sold out show at the Rock and Roll Hotel. Even though the show was just as packed as the We Were Promised Jetpacks show the sound was so much better. I had a big guy in front of me (nice guy) so I couldn't see all that well, but the sound, the sound!, the sound was awesome!


I had never seen a Mayer Hawthorne show before, so I was pleasantly surprised with his musical range and the band's on stage presence and banter. The sound, the music, the audience - all great. All in all it was just a great show and a wonderful evening. I say run out and get his album, A Strange Arrangement, now!