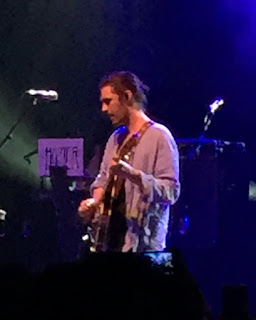 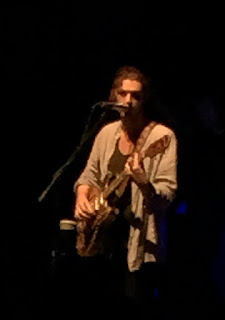 Tonight at Merriweather the weather was not so merry. The weather was pretty impressively angry actually. Was it because the opening act, The Antlers, pissed the weather off? The Antlers aren't a band I would normally listen to but they probably were a good selection to go on before Hozier. After The Antlers Hozier seemed totally upbeat and rocking.

Hozier did a good job of getting everyone back into the show after the hour long storm break. From his between song banter it sounded like bad weather has plagued his last couple of shows. He handled the disruption well and put in a full set.

Maybe it's just me but during the show I thought Hozier's music would have been better suited to the 9:30 Club or a venue a little smaller. I know artists want to play and fill the biggest venues they can. They want, and should, make money. They deserve to be paid for what they do. But tonight I kept thinking this show would be so much better in the 9:30 Club instead of this huge outdoor venue (maybe it was the crazy stormy weather?). His music just seems better suited to something more intimate. Or maybe it could be where I was standing in the pit because I also thought the sound seems a little off tonight. Merriweather normally has great sound.