March 23, 2017
As I said in my last post, after a certain point, headphones are like wine, depending on my mood or what I am eating I might pick a different wine. Or what I love, you might think sucks.  Headphones are like that too, so what I love you may not - everyone has their own taste.
Brent Butterworth on thewirecutter.com said "Grado is to the headphone world what Subaru is to the automotive world: It's not for everyone, but those who like it really, really like it."  Well I guess I am one of them because I really really like the sound.
Grado Labs says the "new SR325e has a new driver and cable design. The added mass from the metal housing minimizes transient distortions. With the new 8 conductor cable design you will notice superb control and stability of the upper and lower range of the frequency spectrum, with both supporting Grado's world renowned midrange. The SR325e will produce a sound that is pure Grado, with warm harmonic colors, rich full bodied vocals, excellent dynamics, and an ultra-smooth top end."
I've had the Grado SR325e headphones for a little over a week now and I am impressed.
Sound:
To me they are headphones, so you start with the sound! I find the Grado SR325e spacious with a great soundstage.  I've listened to music I thought I knew well and heard new intricacies I had forgotten were there. I have another pair of open-back headphones that I thought were great before, but now they seem "muddy" (that's the best description that comes to mind) on some songs when compared to the Grado SR325e. Most reviewers would say that Grado's are not bass heavy, but most of the music I listen to is more guitar and vocals, not thumping bass. But I don't feel that I am missing anything though. To me they reproduce the sound, across genres, very accurately. They don't artificially boost the bass, but I also don't feel that they skimp either.
Audio Specs:
Transducer Type: Dynamic
Operating Principle: Open Air
Frequency Response: 18 - 24,000 hz
SPL 1mW: 99.8 dB
Nominal Impedance: 32 ohms
Driver Matched dB: .05 dB
Comfort:
I've read reviews where people have complained about the headphones being too tight, but these fit me fine.  I think I have a normal size head and there is no squeezing or pinching.  And I have wore them in comfort for hours at a time.
Even when I wear my reading glasses they still worked fine.
I've also read that some find the cup material that goes around your ear to be itchy. Again, I don't see it.  It's not felt or suede, it's a foam material, but it feels fine.
And they are really light (but made solid, you know). 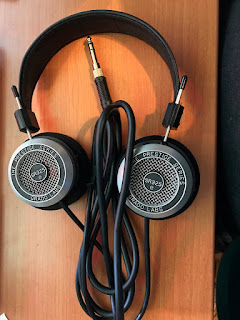 I think the Grado SR325e headphones look great, sound great and are very comfortable. If you are in the market for open back headphones these should definitely be on your short list.
More information may be found at:
http://www.gradolabs.com/headphones/prestige-series/item/5-sr325e

Mayer Hawthorne's & the County laid down the blues at the Rock and Roll Hotel! This show restored my faith in being able to see a good sold out show at the Rock and Roll Hotel. Even though the show was just as packed as the We Were Promised Jetpacks show the sound was so much better. I had a big guy in front of me (nice guy) so I couldn't see all that well, but the sound, the sound!, the sound was awesome!
I had never seen a Mayer Hawthorne show before, so I was pleasantly surprised with his musical range and the band's on stage presence and banter. The sound, the music, the audience - all great. All in all it was just a great show and a wonderful evening. I say run out and get his album, A Strange Arrangement, now!

Harlem
See more photos at my account, phillsea, on flikr I was able to get some pretty decent shots even if I say so myself! ;-)

Congratulations to Airborne Toxic Event for having, not one, but two songs on the pilot of Royal Pains! First Papillon at the end of the drive to the Hamptons then Wishing Well at the end of the pilot. Don't know if I like the show yet but they have good taste in music.